2. Installation of a new shared zebra crossing outside Mount Carmel Primary School. This will help parents and pupils of this school to cross the road safely, and make it easier for cyclists to turn right from Radbourne Avenue into Little Ealing Lane. The new zebra will be also raised which will help to further reduce speeds of vehicles. This will result in removal of existing School Keep Clear markings.

3. Cycle track adjacent to footway to separate cyclists form motor traffic on the section of the road where they are at the most risk. The track will also provide a safer link between Radbourne Avenue and Weymouth Avenue, which is part of a proposed ‘Quietway’ cycle route linking Brentford and Ealing. This will also result in removal of existing School Keep Clear markings which will be replaced by double yellow lines. 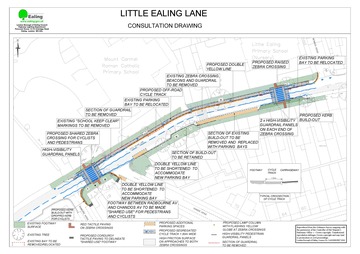